Washington [US], January 13 : Hollywood actor and singer Emma Roberts finally shared the first photo of her son, Rhodes in an adorable twinning moment on Tuesday (local time).
As per E! News, the 'Screen Queens' alum took to her Instagram and shared a picture in which both the mother-son duo were dressed in orange, as she cuddled her firstborn child on a bench in her yard. She captioned the picture as, "Thank you 2020 for getting one thing right. Our bright light Rhodes Robert Hedlund."
While the little one was dressed in the brand Babe&Tess, Emma rocked a Stella McCartney dress with orange Andrea Wazen sandals in the photo. 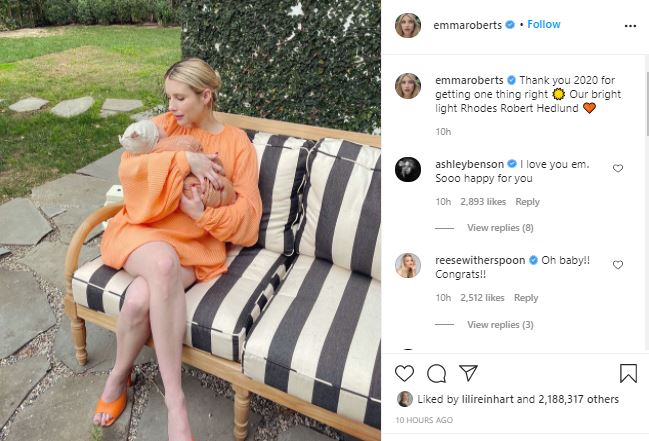 The peachy pic became the talk of the town, with A-listers like Ashley Tisdale, Taylor Lautner, Delilah Belle Hamlin, Billie Lourd, Aaron Paul, Jamie-Lynn Sigler, and Lily Aldridge sending their love in the comments section.
As per E! News Emma, who is aged twenty-nine, had welcomed her son on December 27 in Los Angeles, along with her partner Garrett Hedlund. The 'Holidate' star spent the holidays getting acquainted with her new role as a mom.