New Delhi [India], November 25 : Known as the controversy queen of Bollywood, Rakhi Sawant turned 43 on Thursday. Wishing her happiness, actor Shilpa Shetty penned a sweet birthday note for her, on social media.
Taking to her Instagram story, Shilpa shared a throwback picture of herself with Rakhi and wrote, "Wishing you a very happy birthday @rakhisawant2511! May you continue to spread smiles wherever you go and be blessed with happiness and abundance always," adding a red heart and warm hug emoticon to it. 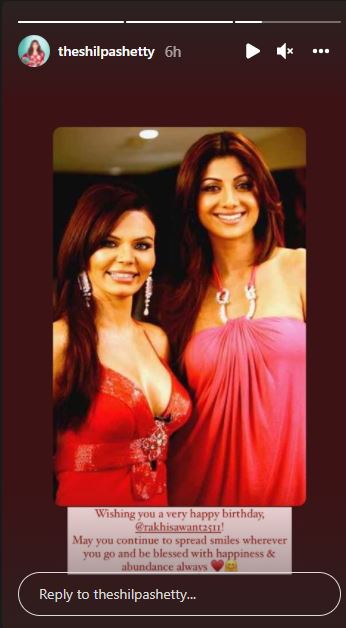 For the unversed, Shilpa is the only Bollywood actor who publically extended birthday wishes to Rakhi. This public wish can also be referred to as a thanksgiving gesture by Shilpa after Rakhi showed support for her as she returned to work amid her husband Raj Kundra's porn racket controversy.
Shilpa returned to the dance reality show 'Super Dancer Chapter 4' as a judge, after almost a month's break due to the arrest of her husband in the alleged pornography case.
A video got viral on social media, which showed Shilpa walking onto the sets of the show in August. An array of netizens felt there was evident "awkwardness" on her face. While many trolled her, Rakhi showed her support to the 'Dhadkan' actor by congratulating her in the comments section, for gathering and coming back to work.
Meanwhile, on the work front, Shilpa is currently busy shooting for the upcoming season of the reality show 'India's Got Talent' as a judge with veteran actor Kirron Kher and singer Badshah. Shilpa and Badshah have replaced former judges Malaika Arora and Karan Johar.